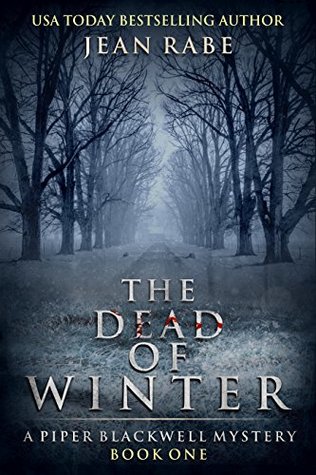 Blurb: In a deceptively peaceful county, a murderer hides in plain sight…

Fifty-eight minutes into her first day on the job, twenty-three-year-old Sheriff Piper Blackwell is faced with a grisly murder—the victim artfully posed amid decorations on his lawn. Drawing on former military training, Piper must prove herself worthy of the sheriff’s badge, and that won’t be easy.

Chief Deputy Oren Rosenberg, Piper’s opponent in the recent election, doesn’t like her and wants her to fail. She doesn’t like him either, but she needs Oren to help catch the killer before another victim is discovered. Too late!

As Piper leads the manhunt, another crisis hits close to home. Her father, the previous sheriff, is fighting for his life, and she is torn between family and duty. Facing personal and professional threats, Piper has to weather a raging storm, keep the sheriff’s department from crumbling around her, and reel in a killer during the most brutal winter sleepy Spencer County, Indiana, has experienced.

The bones of this story was good, but that was pulled down drastically by the characters. When your characters represent every stereotype of the small town, small minded, ignorant and egotistical police officer ever known, you’ve made it nearly impossible to enjoy the story beyond those characters.

I wasn’t a huge fan of the somewhat stilted and choppy writing style, especially when it got applied to the dialog. It made most of the characters voices sound exactly the same. The number of characters that had the same weird habit of repeating themselves, and not just phrases, but individual words back to back, amped up that feeling of sameness.

I did enjoy the ending of this, but that was mostly because you finally get to see Piper with a spine and lose the bland, wet noodle feel she’d had through the rest of the book. Even with the ending being a bit better than the rest, this was just an okay read.