Since we decided to no longer do the garage for Halloween and last year was a huge no go because of Covid, all of my decorations sat unused last year. What I had been using in the garage doesn’t translate all that well to general decorating and all the other pieces I used to put out are mostly old, faded, and not in all that great of shape.

I also wasn’t much in the mood to spend hours putting up a bunch of stuff I wasn’t all that jazzed about. I told the kids to go though stuff and do what they wanted with it. Considering MCG is huge on that kind of thing, I thought they’d have a blast with it. Apparently not as I still really don’t have anything up.

In an effort to kick start something, I started pulling everything out to see what I did still like and try and do something with it. We are still on the fence of even trying to open the door to trick-or-treaters this year. We got so few the last year I did the garage, it really doesn’t seem worth it, so I’m not putting a whole lot of effort into it all.

As I started pulling stuff out, a few things sparked an idea. I had SO much stuff I’d never really use as it was, but would be perfect if I put them together into a wreath for my front door.

I love the idea of wreaths, but have hesitated just because they would take up so much space to store and I really didn’t want to have to find more space for more stuff. Making one with all the stuff I already had on hand, seemed like a perfect idea. It didn’t bring in a bunch of new stuff I had to find room for later and it kept me from having to either toss it or donate it.

For a quick and dirty toss together project, it works. Mostly. Since we have a glass storm door, it gets a little squashed, but maybe that will keep it from falling off as I just have it on a sticky hook for now. There are tons of things I would have done differently if I’d made this with all new things, so the final look isn’t quite what I’d typically go with, but I still like it.

I think I might have to do something similar come Christmas as I have WAY too many things that never see the light of day that would make a really fun wreath, though I might need a better base frame that what this one has. I either have to figure out a way to build one, or cave and get one, which I’d rather not do. Still, it will be fun to try.

And yes, I got to play in my new room while I worked on this. It is officially christened with a crap ton of glitter thanks to that white ribbon. Glitter that I may now never see the end of. 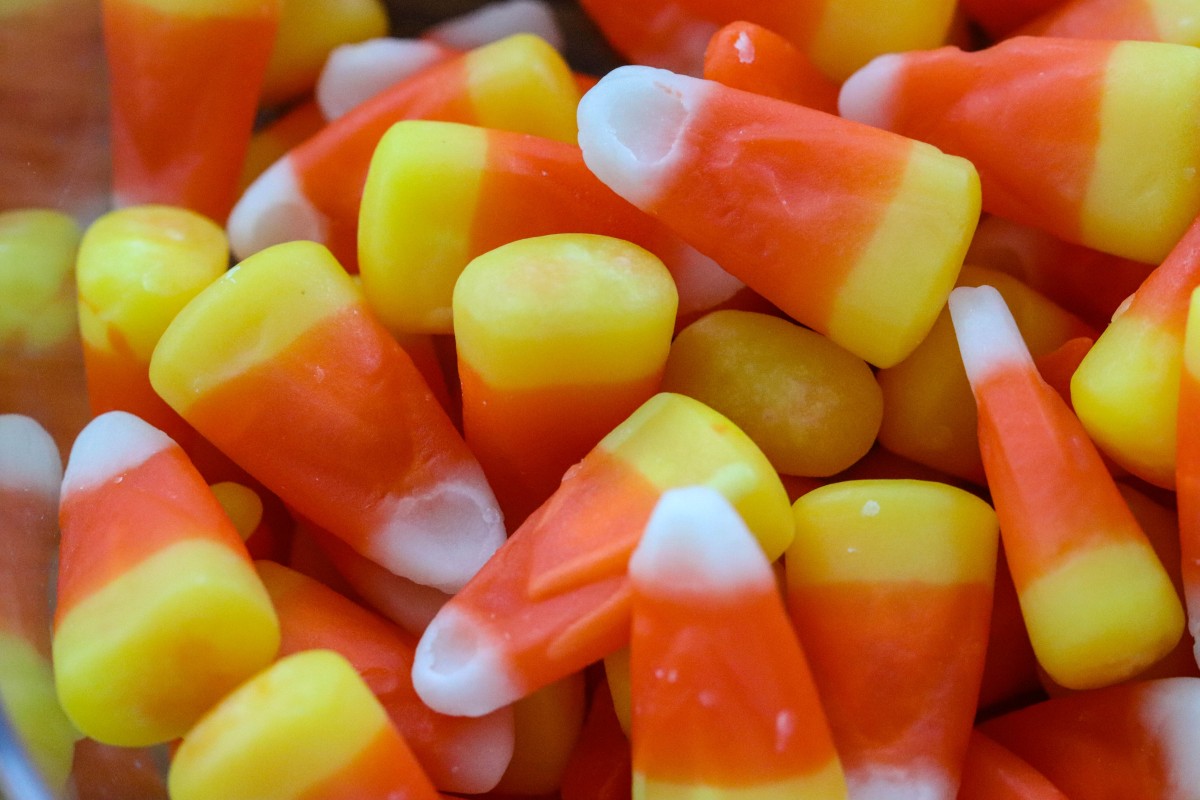 This is the full extent of my effort for Halloween this year. Our lights will be out and we won’t be opening the door to trick-or-treaters. I have never once in my life skipped Halloween.

Instead, we are just going to snuggle down and do a movie night with the kids. It’s going to be weird and a little sad, but I’m okay with that.

I have a couple of new designs done for Halloween masks out on my Redbubble shop. The only difference is that I liked these designs for more than just the masks, so there all kinds of fun goodies to choose from. 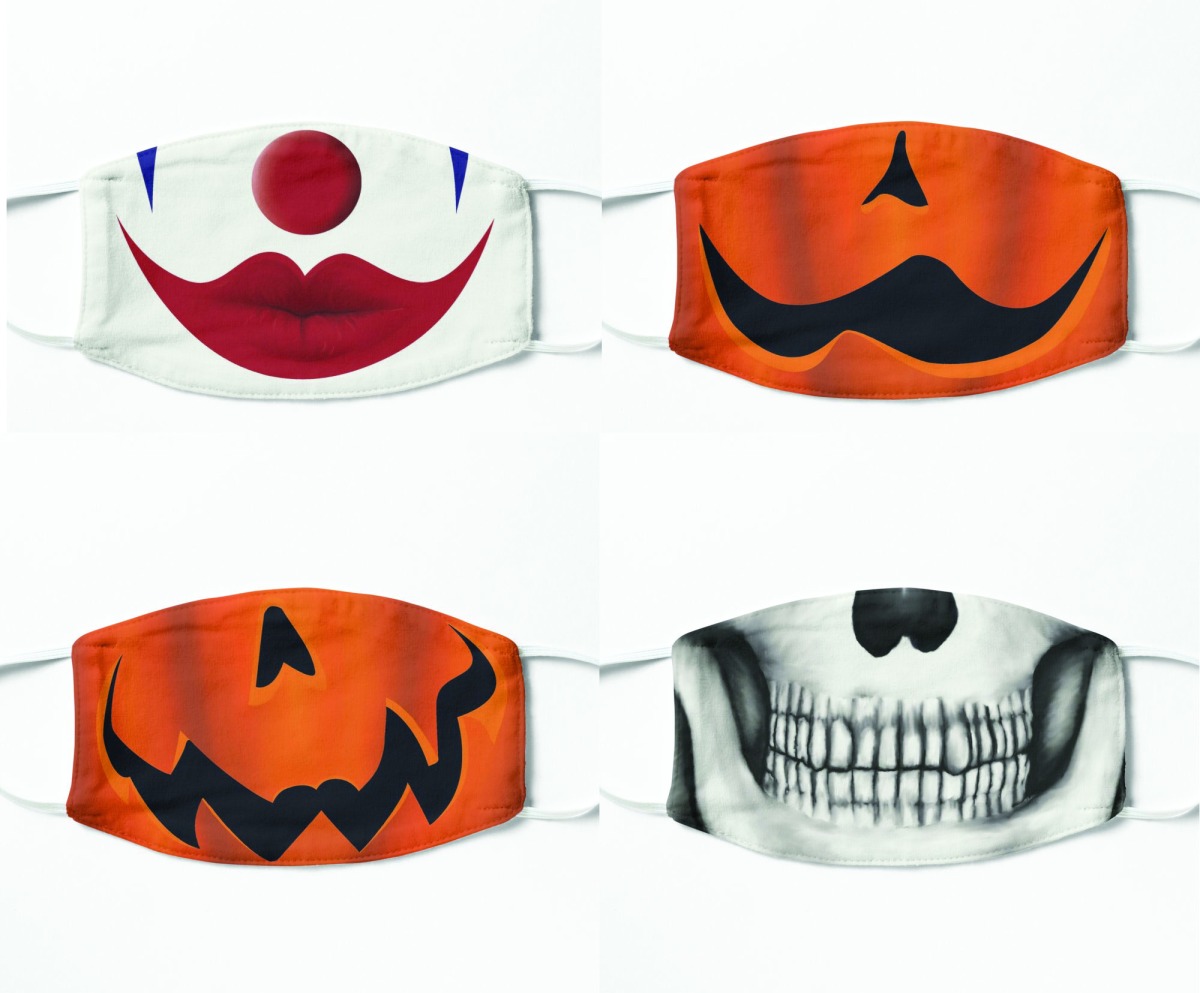 I have been toying with this idea almost since I set up my Redbubble store and I saw they did masks. I mean, come on! If you have to wear a face mask, especially around Halloween, you’ve GOT to have fun with it!

The skull mask came from the idea of doing the concept in face paint. That was my initial goal when I started working on it, but I ended up with something a little different, but still fun. I’m still considering a couple of designs based on different face paint concepts, but am trying to figure out how to pull them off.

The jack O’ lantern faces were one of the first designs I planned to work on. This is one that I may still do up a couple of different concepts besides the two I have so far. They combine one of my favorite fall activities, pumpkin carving, with the fun of playing in Photoshop.

And my deepest apologies to those that hate clowns. I just could not resist! Maybe since it isn’t a full face, it isn’t so bad?

As always, if there is a design you’d like me to work on, feel free to let me know! I’m always open to doing something custom. 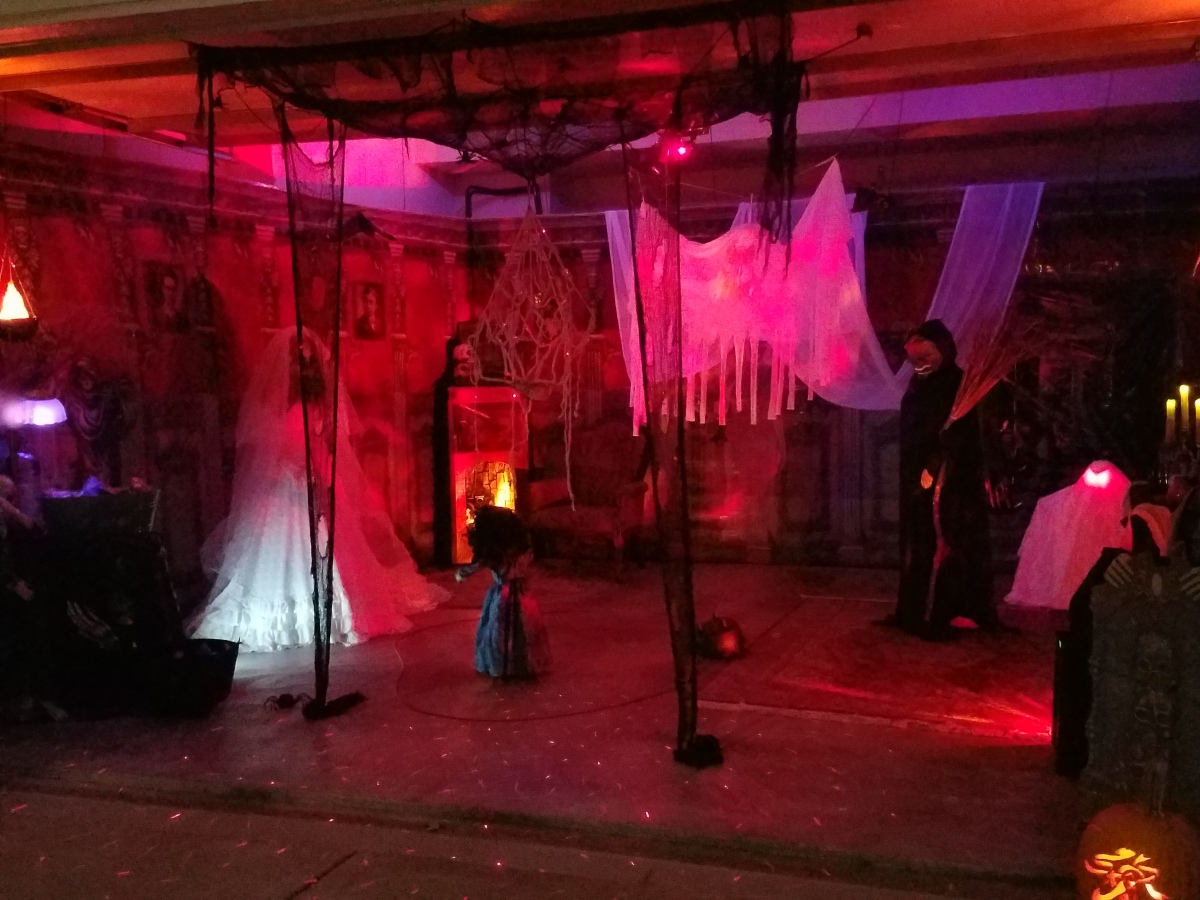 Yesterday saw the official end to our annual haunted garage that we used to do every year for Halloween. Even though we didn’t actually put the walls up last Halloween and was the beginning of the end, it didn’t become official until yesterday. I took advantage of the beautifully cooler day and tore the walls apart.

Why is it that destruction is so much faster and easier to do than creating and building? What took me nearly an entire day or better to build was in pieces in about an hour.

It was sad to see these go. We had nearly 10 years of fun and wonder and joy doing the garage every year, but it was just time to be done. It was pretty shocking they even lasted that long considering they weren’t all that sturdy to begin with.

The kids are all older. MC hasn’t been interested in it for a few years now and BG, while perfectly content to dress up with me, just wasn’t nearly as excited about it anymore. It also lost some of it’s joy when the few kids we would get showing up just didn’t seem all that interested in it, some even going so far as to be that bratty kid that thought it was fun to mock and put it down.

Once I decided I definitely wasn’t doing this anymore, I was itching to get these taken apart and reclaim the area of the garage where these needed to be stored. Six 8 foot by 8 foot wall sections take up a crap ton of space. Especially when that space is used for all but maybe 2 days a year.

I spent the day yesterday breaking these down and then cleaning and rearranging the garage, a desperately needed project. I now have a wonderfully open and accessible garage that will hopefully stay that way for a while.

I also have a huge pile of wood I need to get creative with, which is going to be a challenge as most of those boards are really warped or even cracked in places. As of right now, I’m pondering the idea of making an outdoor storage box with most of it. I’ve yet to decide for sure.

While it was really sad to do this project, it was also a relief. It was always a lot of work, but also a whole lot of fun. The fun will be missed. All that work? Not one little bit.

Now to figure out what in the world I’m going to do with all the decorations we used in that haunted garage. 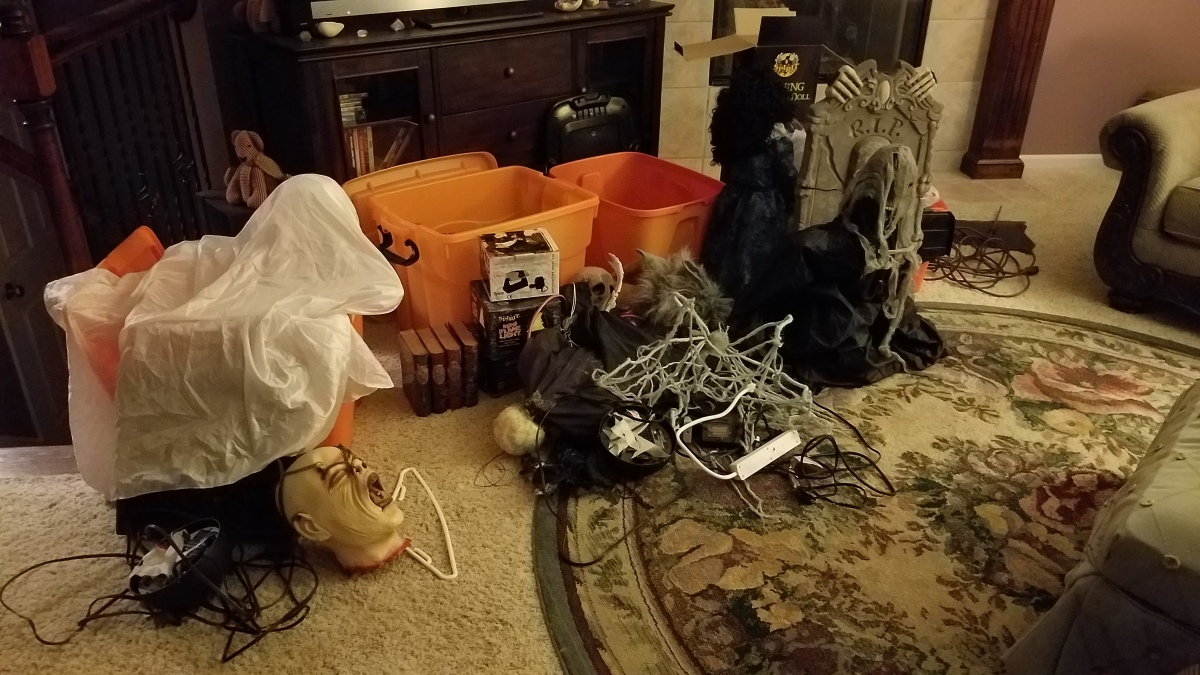 Today is insane. I had a nearly 3 hour call with my editor (notes on that to come). Now I have to deal with the aftermath of having a haunted garage for Halloween and still wanting to put the cars in after it is all over (and that is only a small portion of what I still have to pack up). Having spent 2 days going in and out, then up and down on a ladder, my body is trying to revolt, but I still have to get everything packed up. So… I’m off to get busy. Then crash. 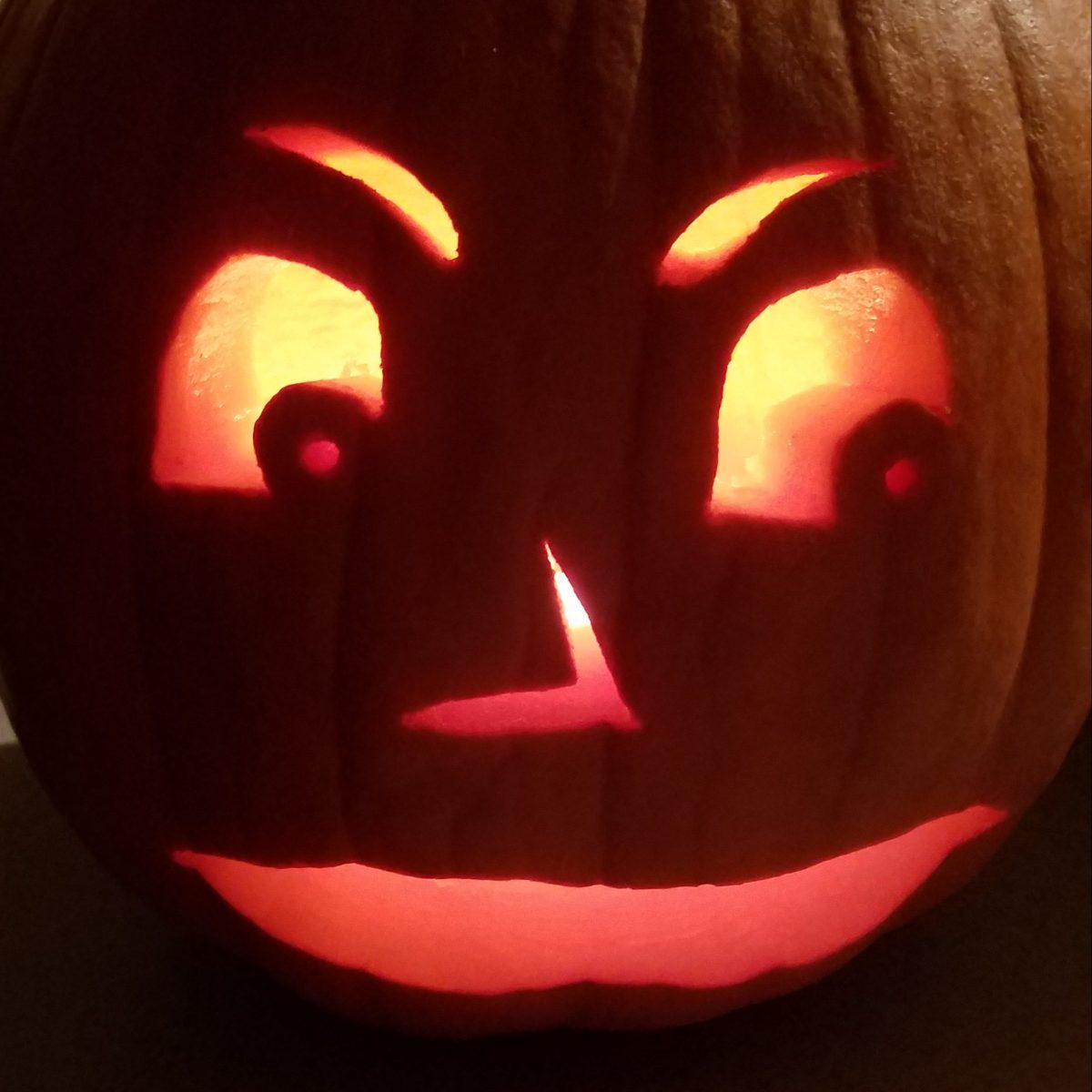 I still have some final packing up to do of the decorations because we just pulled everything down and in last night, but I’m not so sad to see the back side of Halloween this year. END_OF_DOCUMENT_TOKEN_TO_BE_REPLACED 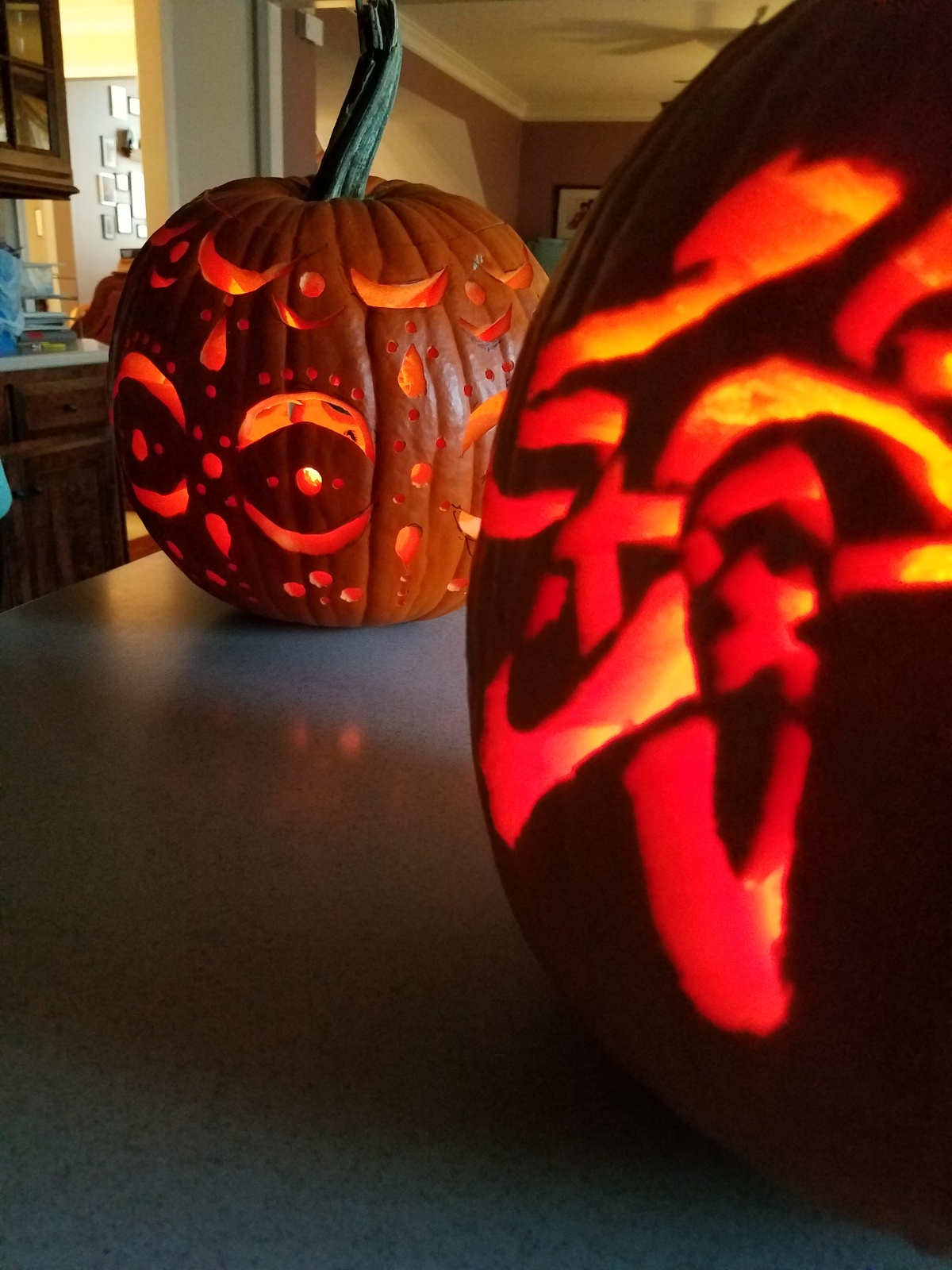 When I went to clean out the pumpkins to get them prepped for carving, I caved and decided to just carve mine as well. It is far from the cleanest one I’ve ever done, but I’ 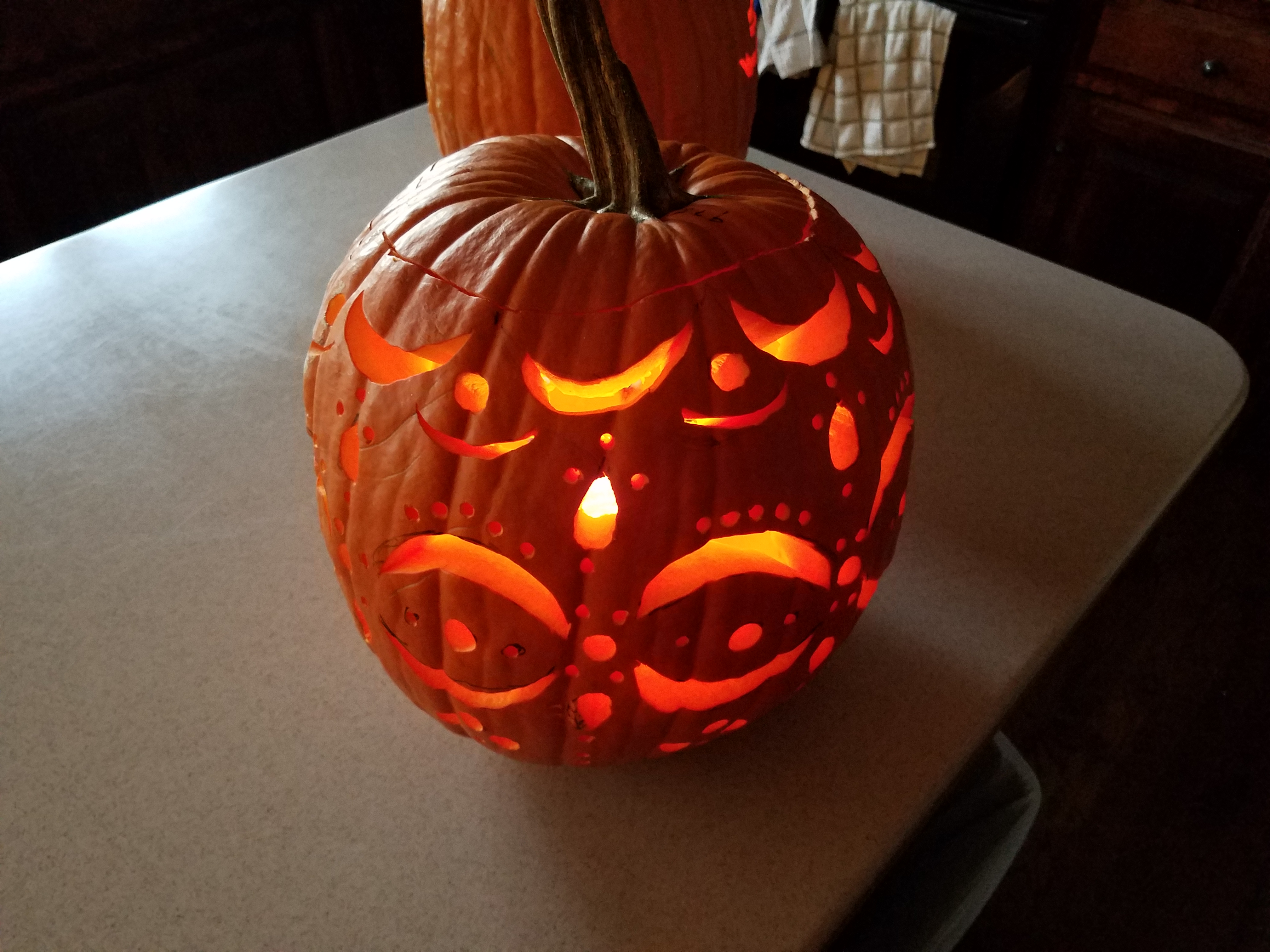 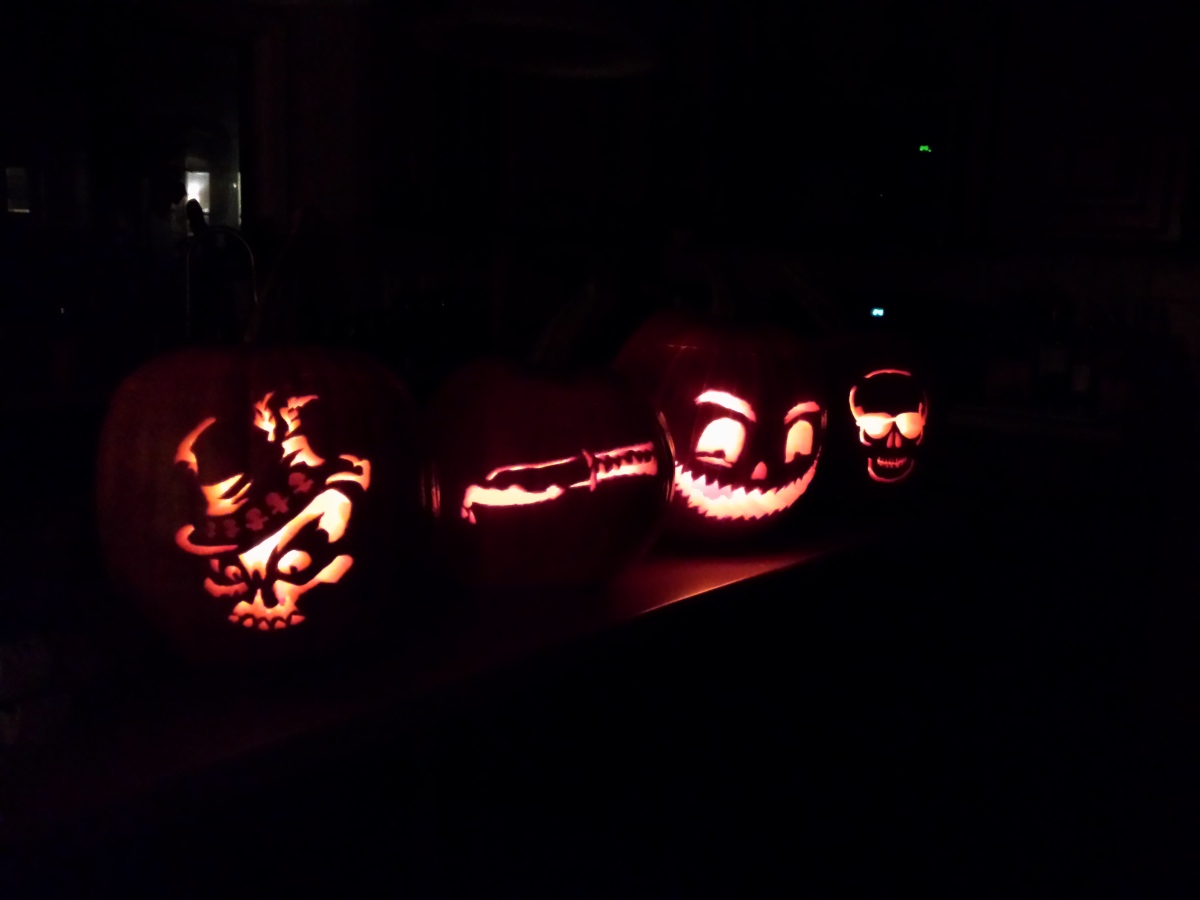 This will probably be the first year ever that I won’t be carving a pumpkin for Halloween. We have always gone all out for Halloween with a full on haunted garage and everything and the pumpkins have always been a huge part of that. It is something I adore doing and usually put a crap ton of work into, but this year, I do not have the motivation. At all. END_OF_DOCUMENT_TOKEN_TO_BE_REPLACED