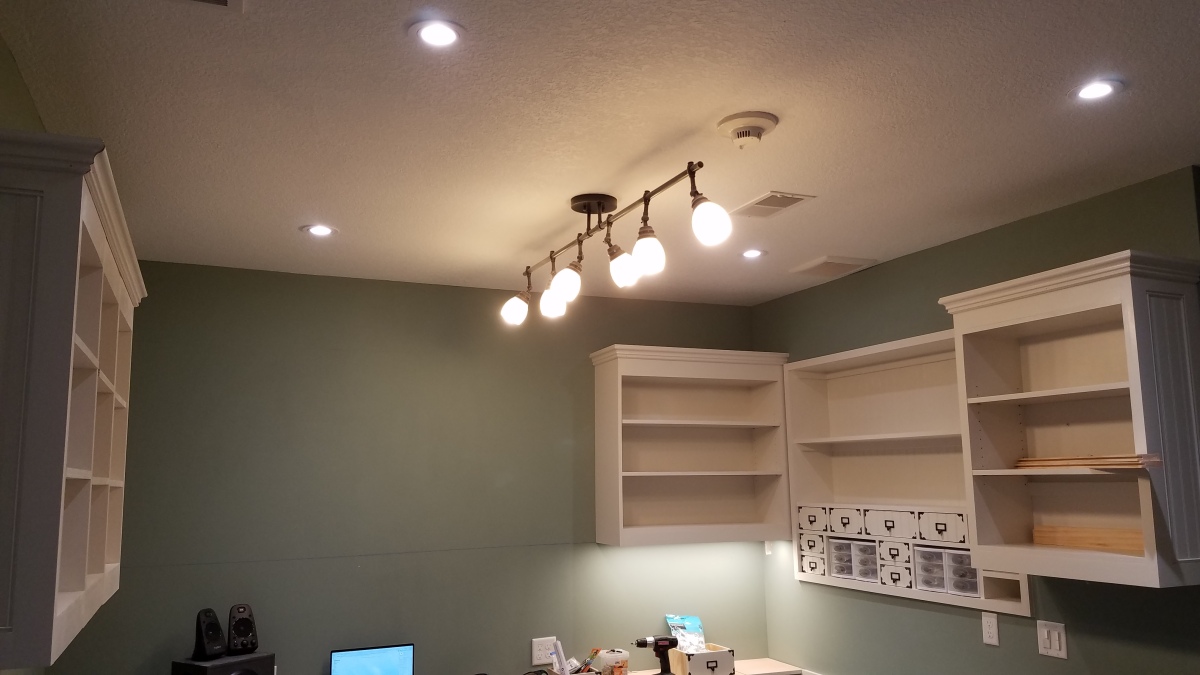 The last several days have been a roller coaster of problems.

I spent an entire day working on getting the crown molding up on the installed cabinets only to burn through an entire piece of trim just trying to get the angles right. Of course, I had to make my life exceptionally hard by choosing a trim that isn’t true crown molding that already has the tilted angle built in. I fell in love with a flat trim instead and had to create an artificial angle for it to sit against. My first attempt proved I had that angle ALL wrong, even with Hubby’s math brain to try and help me out.

After getting to the point where I was ready to burn the whole project to the ground, I finally got two pieces to sit at an angle while creating a right corner AND the edges hit flush the way they were supposed to. So, instead of trying to get the trim to fit a predetermined angle, I had Hubby figure out the angle I needed to be at to fit that corner.

The next day, I was still extremely hesitant to cut another piece of trim after the previous disaster. I even had BG double check Hubby’s math just to make me feel better. Thankfully, those wonderful brains were correct and I now how some pretty good looking crown molding on top of my cabinets. They aren’t completely perfect, but really close. Close enough a little caulking and some paint and you wouldn’t ever be able to tell unless you got close.

The whole thing was kind of a nightmare. Crown is made the way it is for a reason and doing it the way I did was probably not the best of ideas. I really don’t recommend it unless you are WAY more skilled than I am. Sure, it looks really pretty now that it is up, but it was such a huge problem to get it that way that I’m not so sure it was worth the entire day that I wasted the first go round.

I will have to repeat that process for the remaining 2 upper cabinets, but they aren’t connected so it didn’t matter if they were up when I did these, making it easier to get that installed before the counters. At least now I know what I need to do, though I do have to do an inside corner for those that I haven’t done yet, so there is still some fun to come.

I had really thought that once I had the better second day when I finally got that figured out an installed that yesterday would be smoother sailing. Nope. That great idea I had for the kiln shelf? Isn’t going to happen.

The slides I bought to get the shelf to pull out like a drawer won’t work for a number of reasons. After spending yet another day doing all kinds of things to try and get it to work, I finally decided to just chuck that ideal all together. I’ll now have a designated shelf in the new closet for the kiln and I’ll use the cabinet that was supposed to be for the kiln for something else. I didn’t see the sense in wasting any more time on something that wasn’t going to work out well when I could just shift my plans and do something different that would still serve the purpose I need.

After what ended up essentially being two wasted days, I’m now kind of terrified of trying to get my doors hung on their hinges, which is what I should be working on today. I’m actually really tempted to just wait and focus on something else, but I really can’t. Not if I want any shot at all of hitting the date I set for myself to get the bulk of this project done.

I’m am so close, but it feels like I have the most difficult to get right parts left. The kind of parts that if they are messed up even a little can make the whole thing look really bad. Or will require me to completely rebuild doors or something equally horrifying.

I’d say that I’ll be keeping all my fingers and toes crossed, but I think that just might make it kind of hard to use my tools and that would guarantee that I messed up the next part.

But isn’t that crown molding pretty? Okay, so you can’t really see the details, but… it really is.