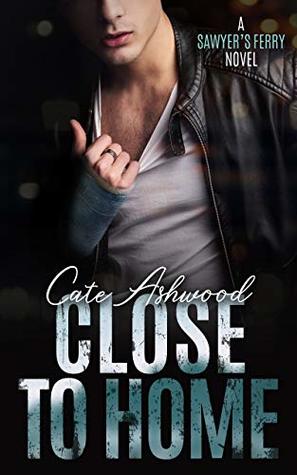 Witt:
I excelled at two things: systems engineering and going completely unnoticed.
The engineering took work and determination. The invisibility came naturally. Until one day, the wrong person noticed me. Battered and broken, I fled, escaping to Sawyer’s Ferry and the only friends I’d ever had.
Now, I just needed to figure out what I was going to do next.

Mason:
Life was good.
I had a great job, good friends, and a family who loved me. Even my roommate was decent. At least he was until he let his nudist brother come to visit. The opportunity to house-sit and help an injured friend couldn’t have come at a better time.
All I’d needed was to avoid an awkward situation for a few days, but I got more than I bargained for when my entire uncomplicated life flipped upside down. The last thing I’d been looking for was love, but it wasn’t until Witt that I realized just how much I’d been missing out on.

This started out really good and I connected with Witt’s character right away. I liked Mason right away as well. I liked how their story was unfolding. But… this ended up being this really long and drawn out story where not much actually happens for the bulk of the story. Then, in the last 10% of the book, the reader gets steamrolled with big stuff going on, Mason and Witt going from taking this snail slow pace to being in love, followed by a huge time jump that wraps it all up in a bow. It started out good, then started to drag and then you hit light speed right before you hit full stop. It was like there was this great story idea but there wasn’t a specific path to a finish. The end felt jumbled and rushed which clashes with the much slower pace of the earlier parts of the story making this fall more into the “Okay” range for me.

Blurb:  They say that time heals all wounds, but losing Parley, his one true love, left Zach with a hole in his heart that no one else can fill. After forty-eight blissful hours alone together as teens in an abandoned house, Parley disappeared. Parley is what he is, and the pray-away-the-gay camp his parents ship him to won’t change that. However, finding the balance between accepting his true nature and not losing his family means tough sacrifices.

Sixteen years later, Zach is thunderstruck when Parley stands on the front doorstep of his house—the house that had been their refuge, which Zach restored. But Parley isn’t alone, and Zach wonders if he’s found Parley only to lose him a second time. If they can overcome the terrors of the past and the situation of the present, maybe they can build a new relationship just as Zach rebuilt the house—brick by brick.

Review:  There was a lot with this book that just didn’t work for me.  The uber crazy religious aspect of Parley’s life and personality clashes with the more carefree no real convictions Zach which makes it hard to believe their chemistry.

I also thought that most of this book was going to be about how they manage to work through 16 years of issues.  Over half of this book was about when they were teens.  Then we are expected to believe that after 16 years, they can be around each other for a few hours over a couple of days and they are not only ready to jump into bed, but move in together and live happily ever after.  Sorry, it just doesn’t work at all for me.  Especially when you take into account what has to be some severe psychological trauma on Parley’s part.

I also never got what the issue was with Parley’s relationship with Veronica.  The story made it seem like it was this huge, weird, big deal.  So what.  They were friends.  Maybe I missed something, but it was just another aspect of the story that didn’t really work for me and I was wondering why it was so heavily emphasized.

While this had some sweet aspects, those were darn near syrupy, rainbows and bunny farts sweet to the point that it wasn’t even believable.

The crazy religious part came across weirdly preachy, which had me coming close a couple of times to just putting this down.  Now, I’m kinda thinking that might have been the better choice.