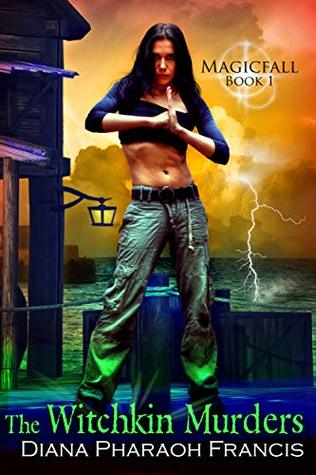 Four years ago, my world—the world—exploded with wild magic. The cherry on top of that crap cake? The supernatural world declared war on humans, and my life went straight to hell.

I used to be a detective, and a damned good one. Then Magicfall happened, and I changed along with the world. I’m witchkin now—something more than human or not quite human, depending on your perspective. To survive, I’ve become a scavenger, searching abandoned houses and stores for the everyday luxuries in short supply—tampons and peanut butter. Oh, how the mighty have fallen, but anything’s better than risking my secret.

Except, old habits die hard. When I discover a murder scene screaming with signs of black magic ritual, I know my days of hiding are over. Any chance I had of escaping my past with my secret intact is gone. Solving the witchkin murders is going to be the hardest case of my life, and not just because every second will torture me with reminders of how much I miss my old life and my partner, who hates my guts for abandoning the department.

But it’s time to suck it up, because if I screw this up, Portland will be wiped out, and I’m not going to let that happen. Hold on to your butts, Portland. Justice is coming, and I don’t take prisoners.

Characters: 3/5 Stars
This one was a hard one to rate as I liked most all of the characters, but not one of the major ones.

Uniqueness Factor: 4/5 Stars
While you have an often seen theme of the real world being changed by a catastrophic event that results in magic and magical beings, I do think it was presented in a new and interesting way.

World Building: 3/5 Stars
Like the uniqueness factor, I mostly enjoyed the world this is built on. I had a few issues with some of the founding facts of the world and how well the author made it work, basically some quirks that didn’t pan out for me.

Personal Opinion: 3/5 Stars
Overall, I enjoyed this book. I liked the majority of the characters and there was a freshness to the way magic was brought into the story in this world. That said, I didn’t love it. It was a good story, but there were a few things that kept it from being a much better story for me.

I was not a fan at all of Ray’s character. He comes across as a volatile, angry, nearly abusive person and I’m never a fan of those types of characters being the love interest in the story. This has a touch of the enemies to lovers trope for those that are interested in that theme, but Ray’s character makes it hard for me to get on board with the romantic aspect of this story.

The way the introduction to magic was presented in this book was really intriguing and I was drawn in by that, but there were certain aspects of it that made it hard to believe. The idea that certain things were difficult to obtain was awesome, but it fizzled a bit in the implementation of that idea because you don’t really see the lack. If a region is cut off with regards to communication and transport of goods, there are going to be much larger issues than what you see in this book. Access to a whole lot of different foods, especially something like coffee, kind of grated on me. Mostly because there was very little explanation as to how things were obtained after transportation channels were cut off. Again, I love the idea, but it didn’t feel completely developed.

Though I wasn’t a fan of those aspects, I was still able to enjoy the story.

*I received a copy of this book from NetGalley in exchange for an honest review.

Other areas of note (not included in the SPA rating):

Cover: 2/5 Stars
I think I’m developing a peeve when it comes to covers. I get this fits the genre, but I’m kind of tired of seeing the ripped, scantily clad bodies, especially women, on most every single cover. Especially when they take up the majority of the cover and don’t really do much of anything to reflect any of the specifics in the story. I think for me it is as much about creativity as anything. How creative did you really have to get when you are doing pretty much the same cover as every other book in this genre?

Peeve Factor: 3/5 Stars
I didn’t include this in the SPA because it wasn’t a horrible abuse of my peeves, but it is worth mentioning and touches a bit on my personal opinion rating. I really don’t like characters like Ray. The angry, never thinks before he speaks, volatile and damn near verbally abusive character. I can tolerate them to an extent and am more willing to do so when it is a side character or a bad guy, but I really dislike them in a lead, romantic role. I’m even willing to overlook that when it is a part of character growth, but you honestly don’t see much of that at all in this.

Also, if you are going to create a world, especially a fantasy one with a magical aspect, I really want to see it fully rounded out. If you are going to do something like in this book and say that transport between regions or even cities is near impossible, then you really need to work on how your characters survive, because in the real world, EVERYTHING is felt on a global basis. There are probably very few areas of the US that could be truly self sustaining without some severe areas of deficits. If the situation in this world had happened over a period of time so that those regions could prepare, that would be one thing, but that isn’t what happened. Granted, this is really a small potatoes issue with regards to the overall story, but it is something that I notice and it irks me a bit when it is glossed over and not actually addressed or dealt with.

There were a couple of others that I noticed while I was reading, but they weren’t really big enough to stick with me by the time I finished. The ones I noted weren’t enough to make me hate this, but it definitely impacted how much I liked it.