Here is the last recipe for the season. This is another super simple recipe and one that is incredibly addictive.

Beat water and egg white until frothy and just until peaks begin to form. Mix pecans into egg until fully coated. In small bowl, combine sugar, cinnamon and salt. Pour sugar mix over pecans and toss until fully covered. Spread evenly on cookie sheet. Bake at 225° for 1 hour, stirring about every 15 minutes. 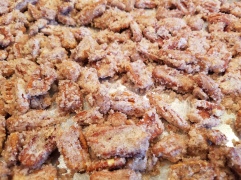 There really isn’t much to say about this recipe, as simple as it is. There are no special tools or techniques needed really other than a decent mixer or a whole lot of stamina to beat the egg white. I was first introduced to these years ago when I was still working. One of the guys I worked with had his wife make this for every holiday party. I was hooked the first time I had them and begged the recipe. I’ve been making them pretty much every year since.