Oodles of hours, multiple trips to both the hardware store and the craft store later and my life size giant nutcrackers are done! 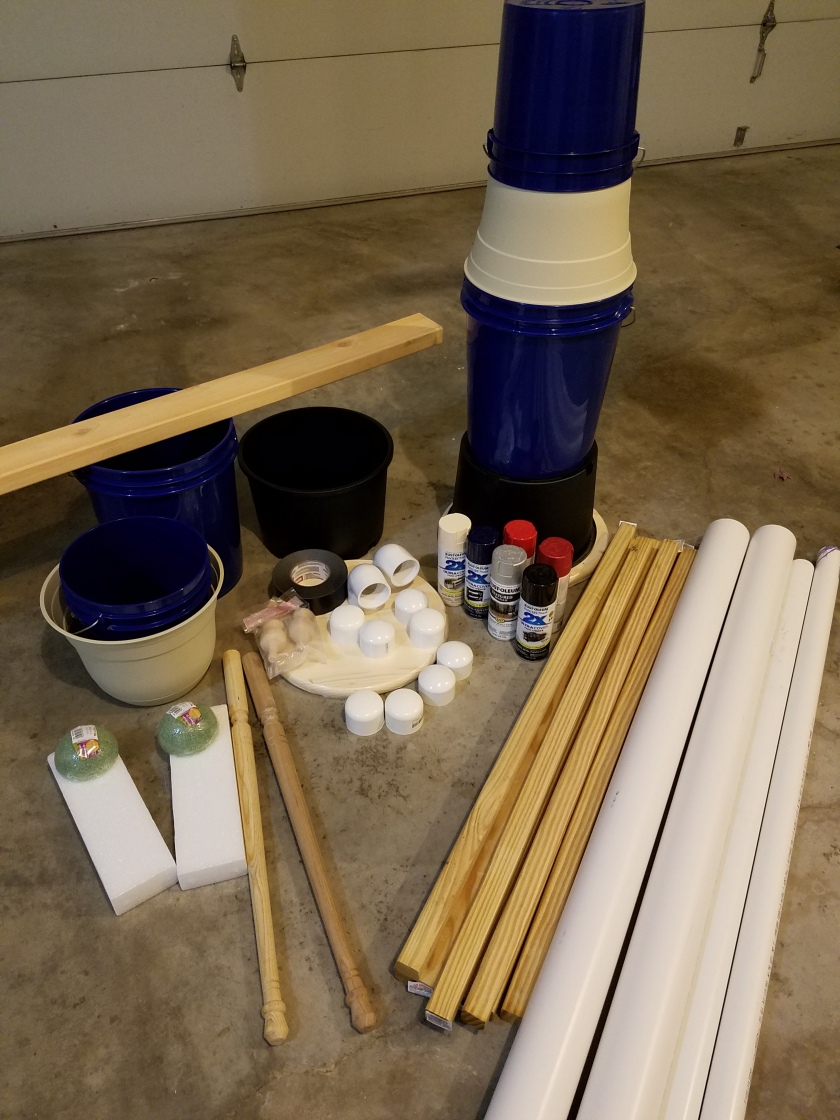 This has been a much larger project than I imagined. It took me so many hours over more than a week of work (some of those being full days), but I’m beyond pleased with the end result. I didn’t list a specific paint, like spray paint because I honestly think this would have been a bit less of a headache if I’d used something else, especially after figuring out the whole glitter on wet paint thing fixing so many ugly spots. 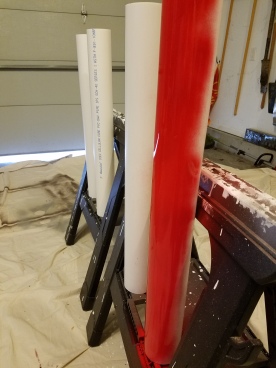 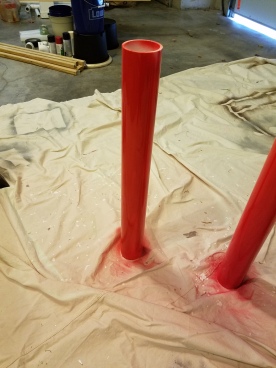 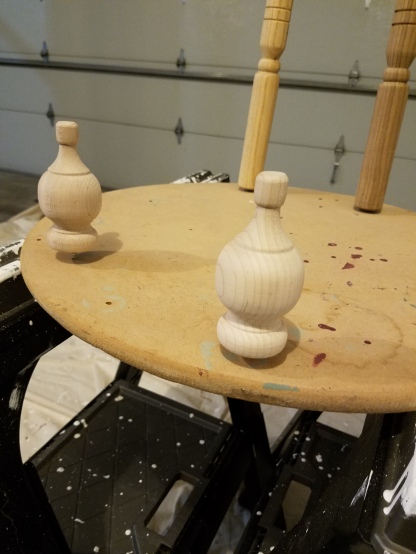 The first step is to get all the different parts cut if needed and then painted. Because so many of my parts needed painting on a variety of sides, I had to get creative with my set up. 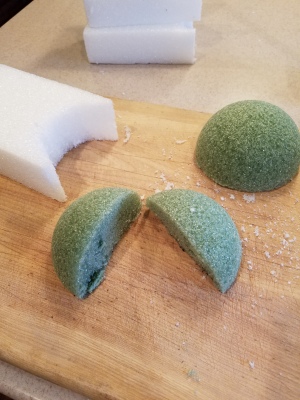 While waiting on the paint to dry, I worked on creating the feet. This is where the styrofoam parts came in. Once I had my pieces, I shaved down the sharp corners on the top of the foam block to match the quarter ball (the toes) then covered the whole thing in black duct tape.

Since I used spray paint, it took a couple of coats on most pieces and several on the red PVC. I think the best option here is honestly to get a good solid coat or two of paint and then cover with glitter while the final coat is still a little wet. Since I used spray paint, I had to use a spray adhesive and then cover with the glitter. Either way works, but I think the spray paint ended up being a lot more work than it should have.

The upper part of the boots I created by just covering a little less than 1/3 of the lower part of the leg PVC with black duct tape. My goal before I started to do any assembly was to have every piece finished with the exception of the embellishments.

This is not a one person job. Unless you have all kinds of cool tools and clamps and fun things I don’t even know exist, an extra pair of hands is absolutely required (THANKS HUBBY!!).

The first part of actually putting all this together was to create a stable base. I cut a small block of 2×4 to fit inside the 3 inch PVC. I then screwed 2 2x2s into that block and then screwed the block to the base. This created the frame for the legs. I’d cut the 2x2s to the length that, with a length of 2×4 across the 2x2s, the base pot came down over the legs by a couple of inches. I also added a screw to each set of 2x2s a few inches below the 2×4 for added stability. Once the block was attached to the base, the PVC was slid over the frame and screwed in place about 10 inches from the base. 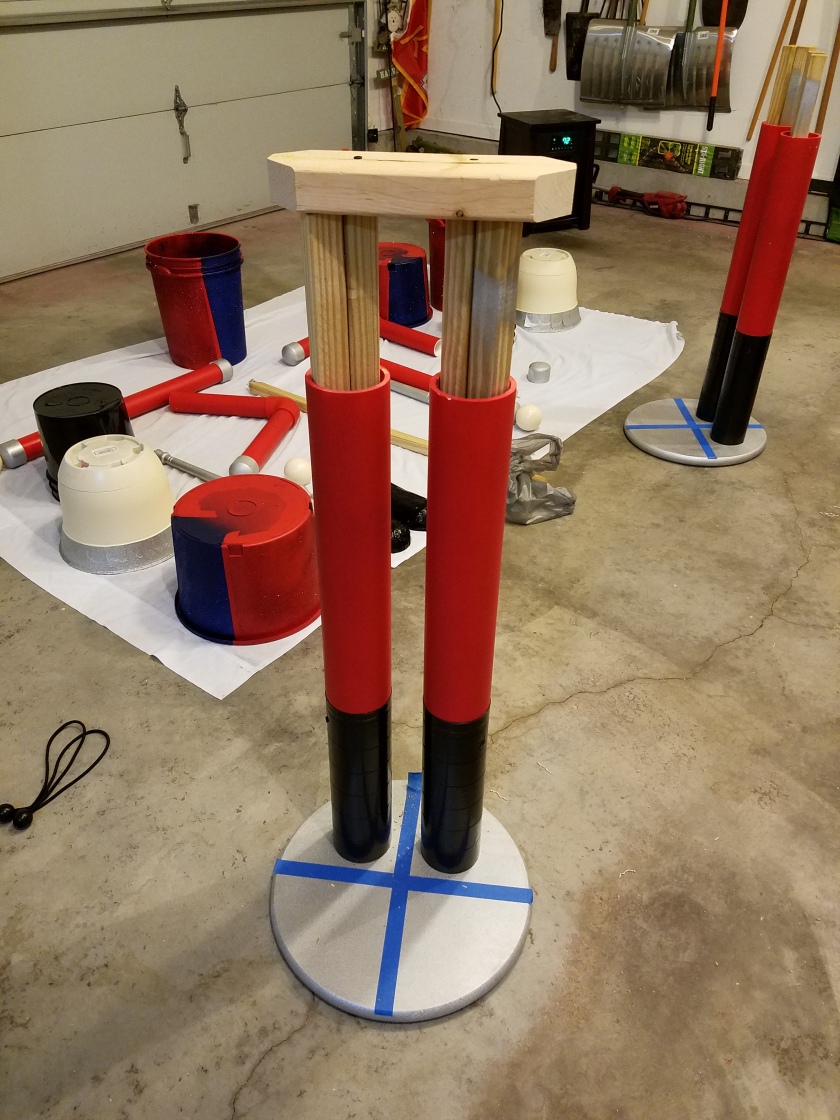 I cut the 2×4 to just fit into the base pot. This creates a frame for the rest of the nutcracker to rest on and be attached to. 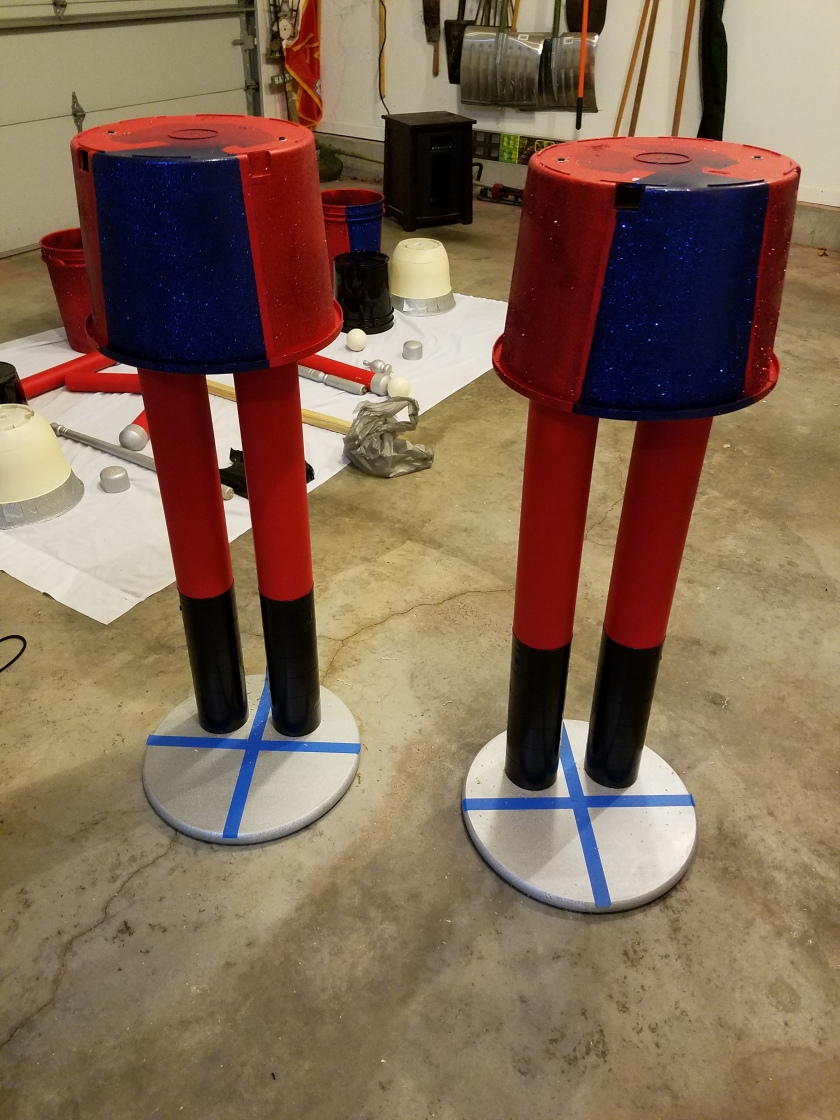 The base pot is attached to the 2×4 from the top and again on the sides. I attached closer to the outer edge of the top to give room to attach the upper bucket to the base. 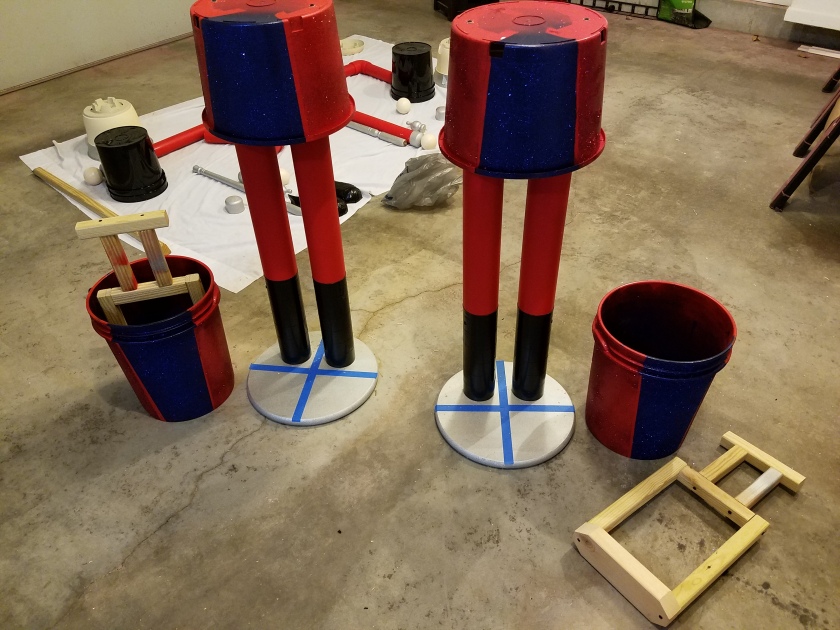 The next step was a pain as we ran through some trial and error. I knew I needed a frame for the main body bucket that would allow both my head pot and my hat bucket to attach to as well as support the arms. Using some 2×4 for the base, I again cut it to fit inside the bucket. I then cut 2x2s to fit the remaining depth of the bucket. That lower square is what supports the arms. More 2x2s cut the height of the head pot create the frame for the rest of the nutcracker. I do not include measurements because the pots or buckets used will most definitely differ from mine.

Probably the single hardest part of this whole project was putting together the arms and getting them attached to the body. There were a couple of different problems that I ran into. One was getting the positioning correct for the final and leg on the hand.

The easy part was drilling a hole in the center top of the PVC end cap and a matching hole in one of the wooden balls. I used one of the small screws and attached the end cap to the hand from the inside of the cap before attaching the cap to the PVC. Both my finial and my leg had a screw end so the holes I needed to drill needed to be the size of each of those screws. The finial needs to line up just right with the leg to give the illusion of a hand holding a staff. My second one came out a bit better than my first. Using painter tape to try and make sure everything stays in line is a really good idea (and why my second was better than my first),

I cannot stress enough, measure, measure, measure! Even though I did, I still struggled to get the arms attached. Mostly because stuff just gets tweaked here and there. I positioned my arm top where I wanted, marked the location I wanted to attach it to the body, at the point where the handle had been for the bucket because it offered more support because of the extra structure around the handle space.

Simple process would be to drill holes in the arm and bucket, going into the inner wood frame, slide the bolt easily home, add the needed washers and wingnuts and your good. This was NOT so simple. Things just struggled to line up. Not quite having my drill angled right, the arm bowing a bit once it was bolted in, holes not quite lining up. Yup! Pretty much all of the above.

I ended up doing two bolts in each arm to prevent movement and add some stability, especially to the bent arm. There is just too much weight with the PVC, the hand and the staff and that puts a ton of pressure on what is basically a small frame and lost of plastic.

It wasn’t in the plan, but I decided to add a little extra to stabilize that bent arm and attached the lower portion of the staff to the leg. This will only work if you’ve angled your staff correctly. I figured this out when I went to do the second one and the arm angle was a little different than the first one. Kept bashing my head trying to figure out what I did wrong when it dawned on me that it was the angle of the staff, not the attachment of the arm to the bucket.

This was the point where I had to figure out the problems I’d had with my head pot. The first run with the metallic spray paint failed. Then, the glitter duct tape refused to stick. Either to the pot or to itself. I made yet another trip to the craft store (3rd round I think?) looking for silver glitter paint. I really didn’t think it would be that hard to find. I was wrong. I did find a silver metallic that wasn’t quite what I was looking for, but fell back on the wet paint/glitter technique and it worked perfectly. I also had to paint the faces before I could attach the heads.

I used a soft vine charcoal to draw my design as it easily wiped away. I still had a little bit of an issue with it trying to bleed into the paint, but another coat of paint took care of it. *I struggled like crazy to find something to work for a nose. I really didn’t want to use any kind of foam because I was worried that just gluing it in place with the problems I had with my paint on this pot that it would just come off. I thought I’d easily find a round wood disk I could cut into something like quarters and I’d be good. 3 different hardware stores and the craft store and not a single wood disk in sight. The hardware store had some plate used for attaching a railing to the wall but they were routered only on one side. If you have the right kind of tools, this would be a breeze to make, but I only have a miter saw and a Dremel tool with very few attachments. Nothing that would create what I needed. I finally found a wood address plaque that had routered corners that were done on both sides of the wood. I was able to cut the sections off I wanted and screw them to the pot so they won’t come off.

I was so excited when I finished painting these faces last night. It kind of brought the whole project together and I could really see how well they were going to turn out.

It was a simple enough process to screw the head pot down to the cross piece from the top and the hat bucket into that same cross piece from the sides. All that was left at that point was attaching the feet with some more black duct tape and putting on all the embellishments. As I actually collect nutcrackers and have since I was 16, I had more than enough reference material to get the final design planned out. 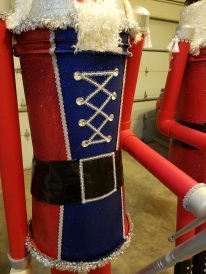 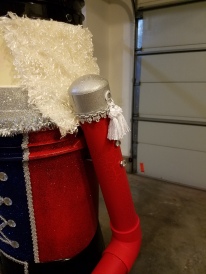 Lots of rhinestones and ribbon along with a duct tape belt and my nutcrackers are complete, bringing my collection total to 40.

The final height measurement came in around 5’9″. While these suckers are heavy (don’t have an actual weight) and I do plan on keeping them outside, I have them in tonight as it is supposed to get really windy from the perfect direction to maybe be a problem. I want these to last forever as I’m NEVER doing this again, so poor Hubby will be packing them inside if it gets too windy or nasty, not because I don’t think they will tolerate it, but because I just really don’t want to take the chance.

I am over the moon giddy and excited about these. They came out leaps and bounds better than I’d pictured. Every single mistake led to me doing something a little different that was way better than my plan.