This took longer to get to than I had hoped, but I finally managed to work it in between other projects and got this finished.

The issue I had with the original fabric I’d chosen really threw things off.  The other chocolate fabric I thought might work had me waffling because I couldn’t confirm that it was the same type of fabric as my seafoam.  When I looked at them side by side online, I finally saw why they looked different.  They were actually by two different manufacturers, so the more satin look of the chocolate was more than likely a truly accurate representation.  Since I wasn’t going for high end bordello as a look, I just decided that I’d use seafoam fabric on the ottoman and two pillows, as I really did love it, and then get the chocolate for the other two pillows.  Even if it did have a higher sheen to it, it would still work and it would tie both the pattern and the color into the entire look a bit better.

Once I had a definitive plan for the fabrics, I spent a lot of time laying out the pieces on the ottoman to try and figure out exactly how I wanted to put this together.  The end goal was to have more of a tailored slipcover rather than something that was permanent so that if I ever needed to, I could wash this.  With two cats, a dog and three kids, washable is always a huge plus.

I stripped the original skirting off the ottoman.  This eliminated the issue of extra bulk on the bottom that I would have had if I’d left it in place.  I didn’t realize until I started ripping the seams that those seams sort of held the entire top down to the base so I had to go along and hand stitch the whole thing back together as I took the skirting off.  While it was a little more work than I’d planned, it wasn’t quite as bad as I thought it might be when I first discovered the problem.

Once the skirting was removed, I got the top cushion cover put together.  I didn’t want a lot of seams on this part as I liked the smother look with the pattern of this fabric.  It was also my goal to only use the piping along the top edge of the skirt.  I managed to work it so that the only seems were along the side corners of the cushion.

When I was getting ready to start on the skirt, it dawned on me that I had a pretty large pattern that was going to need to be matched up or it would probably look a little strange.  I had a few moments of panic trying to figure out how to get it all to work and whether or not I’d have enough material.  I had planned to use the original skirting pieces as patterns to cut out the new pieces so between using those and holding the new fabric up and using a crap ton of pins, I managed to get 3 out of the 4 lined up perfectly.  Sadly, I didn’t have another piece long enough to do the final side and match it exactly.  I decided it was close enough and that would end up being the side I kept facing the love seat.  To make sure I got all the pieces in the right spot by the time I finished this, I numbered each side on the cushion cover and on the skirting piece.

I chose to not only use the original skirt pieces as a pattern but to use the lining from those pieces as well.  There was no sense in not reusing as much of the old as I could.  I also knew that I’d be pretty close on the amount of fabric I had, so I made the side overlaps a bit smaller than the original pieces in an effort to conserve as much as possible.

By the time I got each piece backed and edged, I had to figure out how to work in the piping.  I knew that there were going to be places, the corners especially, where there were going to be multiple layers making it super thick to sew through.  I didn’t think I’d be able to pin all those layers and add the layer of the piping at the same time while keeping everything lined up and straight, so I pinned the skirting and corners in place along the top cover, then went back and worked the piping in and and basted it in place one pin at a time, keeping everything in the right place.  After everything was basted, I was then able to put this on the machine to finish it off. 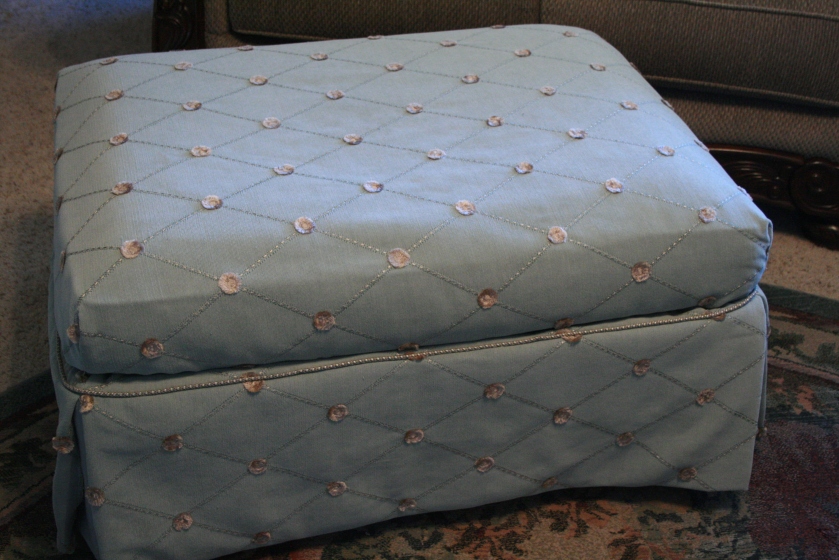 I had originally planned to put a line of elastic inside where this tucks under the pillow, but I wasn’t sure how it would work.  For now, I just have it wrapped around the outside of the fabric and tucked under to where you can’t see it so that I can see what, if anything, needs to be done with it.  I may just decide to leave it as an outer piece, making it easier to pull the cover off when I do need to wash this. 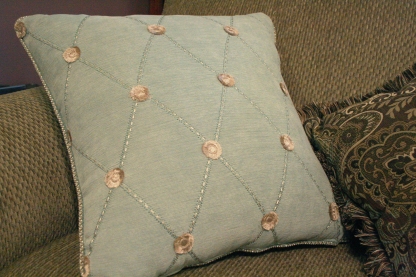 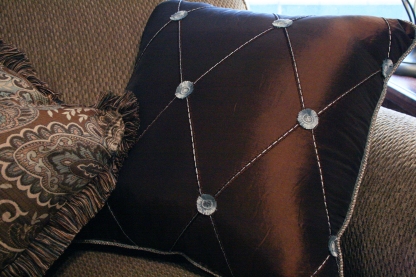 In the end, I didn’t actually have enough of the seafoam to cover my 4th pillow.  I did the two in the chocolate and one in the seafoam.  That actually gives me a total of 5 pillows for all the furniture, which is a love seat and two chairs.  I think I may just leave it at that as I don’t really need another pillow and I like the way everything looks as it is.  I was able to use both the original pillow fill and the zippers to put these pillows together.  All of the fabric from the original pillows and skirting was still in excellent shape and not faded or worn like the top, so I’m giving it to my mom who plans to use most of it to recover the cushions of an old rocking chair and potentially to make a bag or two, so in all, this project had almost zero waste.

I was really hesitant to use this fabric on the ottoman, but I do love the look.  I’m not certain that it is going to really wear well because of the type of softer fabric that this is (and especially since my cats apparently love those little fringe disks), but hopefully the fact that I can take this off when needed will help.  The colors and textures, just everything, is really how I had hoped this would turn out.  Both the seafoam and the chocolate bring out the colors in the pillows that came with the love seat (center pillow in the above photo) and the chocolate brings out all the rich, warm tones of the wood and helps that to pop in the room.  I am absolutely thrilled with how all of this turned out.  While I did have a few hiccups and moments where I wasn’t sure how I was going to work through a problem, this really was a pretty easy project and I’m so glad I decided to take it on.